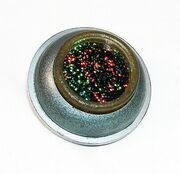 The Appearance Generator is a Thermian technology that allows the highly inhuman species to assume a humanoid form to aide in the interaction with other species, and to better emulate their idols.

The appearance generators are holographic projectors used to overlay a dimensional image over the person (possibly called an E-skin). The device seemingly alters the mass and shape into that of their disguise, allowing the cepholopedic Thermians to have the look and feel of a human. They could switch automatically between their normal form and disguise with the device, though it seemed either pain or energy surges could switch them back to their real form in the manner of a glitch. A user seemingly could partially transform, as Laliari had tentacles wrapped around Fred Kwan while passionately kissing him, all while still being in her human form. It is useful for undercover operations or for any situation where its necessary to assume another identity. Originally designed to create the image of clothing on, early appearance generators allowed wearers to remain fashionably dressed no matter how quickly trends changed. When it was discovered the batteries in early models were prone to failure, the entire appearance generator industry nearly collapsed until a brief fashion fad of public nudity came to the rescue.