Epsilon Gorniar II is a remote desert planet located in the Ni-Delta region, beyond the Tothian minefield. It orbits two stars which bathe it in constant sunlight and is mostly unremarkable aside from its rich deposits of Beryllium Spheres in the southern hemisphere, it is also known in some circles as being a source of hellcuinogenic tumbleweeds. It seems to have at least two moons orbiting it. 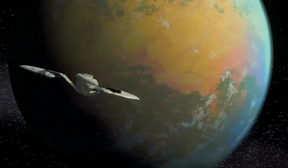 There appears to be little more than endless desert on this world, no surface water is seen other than that which seems to have been collected in the debris of the abandoned Mining Facility.

Before the arrival of the Galaxy Quest cast on the planet there was a mining colony established by an unknown race (video records obscure have their faces obscured with a bandana, and have them using the Blue Demon word Gorignak) their goal seemed to be mining beryllium.

After the Galaxy Quest cast passed through the minefield the Protector II was extremely damaged, with the ships Beryllium sphere damaged. They needed to acquire a new sphere so they landed on this planet to acquire one, unfortunately the mining facility was inhabited by the Blue Demons.

They managed to get a sphere back to the Surface Pod, but Jason Nesmith was stranded on the planet. The Blue Demons provoked Gorignak into attacking him, but Fred Kwan managed to retrieve him with the Digital Conveyor.

Retrieved from "https://galaxyquest.fandom.com/wiki/Epsilon_Gorniar_II?oldid=5261"
Community content is available under CC-BY-SA unless otherwise noted.