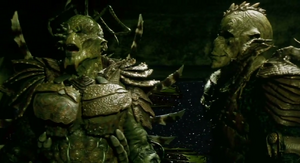 The Fatu-Krey are a species of green-skinned reptilian humanoid extraterrestrials from the planet of the same name.

They are green-skinned bipeds with no apparent nose, they are appearently descended from lobster-like creatures, their eyes have been described as "crepuscular compound eyes". Certain information seems to indicate that the species reproduces sexually, having both males and females. Such information also noted that they take women from other worlds and have them as spoils of war, using them in a sexual manner against their will.

The Fatu-Krey seem to be led by the Sarris Dominion. They are tyranical, oppressive, abusive and generally highly aggressive under this leadership. One Fatu-Krey soldier notes that appearantly on his planet they share women, thus it seems likely that the females of their society are not equals. They are said to have taken women from across the universe for sexual purpose and against the will of the women. They also seem to be well known conquerors, known to often engage in wars for power and to expand their rule.

The technology of the Fatu-Krey uses many biological components. Their ships are known to have sentience, and guns seem to be made from chitinous materials. They have stolen technology from other species, most notably the Thermians.

The specifics of their technology are not well known, but they have mastered insterstellar travel, and have an understanding of cybernetics. Their ships are outfitted with Implosion Missiles and Neutron Armor. As well they seem to have a sort of digital conveyer.

Not much is known about the language of Fatu-Krey, but a few words are known