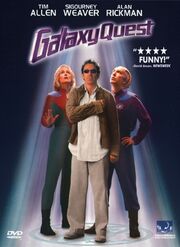 Galaxy Quest is a well known film released in 1999 known for being somewhat of a parody of Star Trek. The film is largely comedic, but it has concessional dramatic moments.

Jason Nesmith, a.k.a. Commander Peter Quincy Taggart, (Tim Allen) is a has-been actor who makes a living from appearing at science fiction conventions as his type cast character. His old castmates hate him for stealing the limelight, but his fans adore him -- including the Thermians, a species of aliens that do not understand that the show was entertainment. Their species is under attack, and they see Commander Taggart as their only hope to save them from genocidal General Sarris.

Thermians, the aliens who go to the "crew" of the Protector for help: