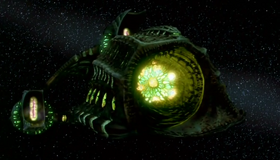 The K'ragk-Vort't was the flagship of the Sarris Dominion, personally comannded by Roth'h'ar Sarris himself.

Like all Fatu-Krey ships, it employs biological technology, giving it the ability to regenerate itself when damaged in combat. It was an extremely powerful vessel capable of interstellar travel.

The biological systems of the K'ragk-Vort't endowed the ship with conciousness and even a personality. Like most sentient ships the K'ragk-Vort't looked to its commander as a father figure. Predictably Sarris did not return the feelings, resulting in the ship's negative behaviour.

The ships primary means of defense was its neutron armor (presumably complimented by the ships ability to heal). Its offfensive capabilities were great, it was equipped with a large armament of implosion missiles and positron missiles.

From this ship Sarris terrorized the Thermians for years, until the ship was destroyed along with most of its crew by a barrage of Tothian Mines dragged by the Protector II.