"By Grabthar’s hammer, by the sons of Warvan, you shall be avenged."
―Dr. Lazarus 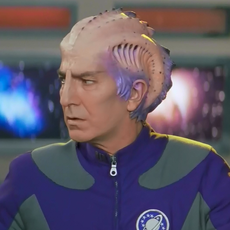 The Mak'Tar are a humanoid species native to the planet Tev'Meck. They are considered a peaceful species invested in the search of knowledge, averse to violence yet capable of it. They were eventually invaded and destroyed by the hostile Meechans. The only known survivor of the planetary genocide was Dr. Lazarus. It is unknown whether this means he is the last of his kind or if there are other Mak'Tar spread throughout the galaxy.

Not much is known about the anatomy or physiology of the Mak'Tar apart from the readily observable. They seem to be reptilian or amphibian in nature, and their diet is at least partially insectivorous. They resemble humans in terms of basic skeletal structure: a normal Mak'Tar body comprises a head, neck, trunk, two arms with five-fingered hands, and two legs with probably five-toed feet. Their complexion appears to be similar to the human caucasian tone, although it is possible that their species may boast different skin colors and crest highlights.

Instead of head hair, the Mak'Tar possess cartilaginous scalp crests, the one in the middle being wider than the lateral ones; they grow from what would be the human hairline to the nape. These structures are rigid. The middle one sports three lines of ridged nubs which turn into stiff frills along the back of the head that may be some shade of purple in color. Small, less rigid fills reminiscing of tiny tentacles grow along the back of the neck, behind the ears, and where a human's sideburns would be. There also appear to be five small cavities on each side of the head similar to nostrils, though it is unkown if these serve any purpose, be it respiratory or otherwise.

Despite not having hair in their scalps, the Mak'Tar wouldn't seem to be devoid of it completely. They have eyebrows and might have hair in other parts of the body. It is unknown if they are capable of growing a beard.

The Mak'Tar carry a fertilized embryo, which they receive from their mother at some point in their lives. It is contained in a volvac sac, which is probably a reproductive organ of some kind, until certain hormonal changes brought on by behavioral patterns occur.

It remains a mystery whether only males of the species receive a fertilized embryo from their mother, or if all Mak'Tar undergo this biological phenomenon regardless of their sex. There is also no information regarding the process by which the mother gives her child the embryo. Moreover, the ability of a male Mak'Tar to carry a fertilized embryo to term doesn't confirm that they are fertile themselves, although it would be logical if they were.

The species' practices and beliefs seem to be referred to as The Code of Mak'Tar. They also appear to practice a polytheistic religion and worship many gods and legendary figures, three of them possibly being Grabthar, Warvan, and Ipthar. Out of these three, Grabthar appears to be the most culturally reverenced, with his hammer being a fearsome and mythical weapon.

Although the species is peaceful as a whole, they do not seem to be devoid of combative arts and understanding. The Mak'Tar practice a move called a Stealth Haze, which helps them remain undetected when performed correctly. They also have a chant to help them gather strength, which is the repetition of the phrase "larak tarath." Moreover, they are capable of great anger and seem to believe in retributive justice. The set phrase "by Grabthar's hammer, by the sons of Warvan, you shall be avenged" appears to be a common utterance delivered by a Mak'Tar to whomever they wish to avenge. This might indicate that they place a significant amount of importance in exacting revenge in the name of those who have been wronged, especially if they are loved ones.

They seem to prefer their living quarters free of all distractions, and their beds are nothing more than a series of spikes that they sleep upon. A traditional Mak'Tar dish consists of serving a bowl full of live scorpion-like insects (called Kep-mok Bloodticks) in a transparent liquid.

Not much is known about Mak'Tar history. They were probably a technologically-advanced species with an affinity for science and logical thinking. It is possible they practiced a strict adherence to cultural rules, pacifism most likely being amongst them, and that they placed a great value in family and knowledge. They may have been a warrior race once, but it seems that they had long managed to harness their aggressive tendencies by the time Dr. Lazarus was born.

When Dr. Lazarus was a child, their homeworld was invaded by the Meechans. Lazarus escaped despite his young age, though it is unclear how, and it is said that he was the only one to avoid the gruesome fate. The traumatic experience would change him for ever, and he would be haunted by the memories of the genocide of his people for many years.

In the real world many fans dress as Dr. Lazarus at conventions, and even take time to learn the Mak'Tar language. Alexander Dane seems highly annoyed by the repetition of his character's catchphrase. The Thermian man Quellek devoted himself to the Code of Mak'Tar and lived his life by their culture and philosophy.