Never Surrender: A Galaxy Quest Documentary is a 2019 feature-length documentary produced by Fandom that explores the legacy of Galaxy Quest and the hard work it took to create the film. It features brand new interviews with key cast and crew members, as well as notable sci-fi actors and creators, sharing their thoughts about Galaxy Quest and its lasting cultural impact.

By all accounts, it was a movie that beat all odds: Surviving a set fire, the loss of a powerful director, and a studio that didn’t understand what it had, “Galaxy Quest” turned into a pop-culture phenomenon that would “never give up, never surrender.” As the cult classic nears its 20th anniversary – premiering on December 25, 1999 – “Never Surrender: A Galaxy Quest Documentary” explores how the science-fiction comedy became an enduring fan favorite, a movie that helped launch the sci-fi- and fantasy-driven movie and TV industry that dominates global entertainment today.

Featuring a special video introduction and the premiere of the Galaxy Quest Honest Trailer by the ScreenJunkies team! 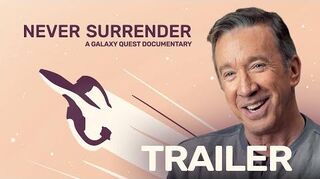 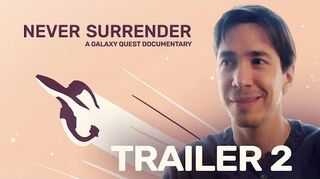