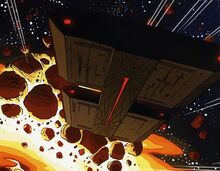 The Judgement Ship, also known as the Ya Yayayayaya Yomontor Kaiaiaiaiaiiie in the Thermian language, is a ship that is known by many names throughout the universe, always leaving a dead planet in its wake.

It was built, and is inhabited by the Judgementites. They travel the universe in this ship looking for a race worthy of their attention, a twisted mission of exploration.

The ship is powered by the Judgementites confidence (causing the confidence of the race to falter will weaken the ship). the ship is extremely powerful, the mere presence of it in orbit around a planet will cause horrible calamities on the world and eventually destroy it.

Retrieved from "https://galaxyquest.fandom.com/wiki/The_Judgement_Ship?oldid=4161"
Community content is available under CC-BY-SA unless otherwise noted.